Iroquois women, like many Native Americans, were honored in their society.  Inhertiance fell matrilinealy, and clan mothers were given the right to ordain and remove sachems from the Iroquois Confederacy (Doherty 18).  Women were listened to.  During the day it was a woman's job to take care of the longhouse.  They were responsible for tending to the gardens, collecting food, and preparing meals (Kalman 19).  They also made many household objects for the longhouses, such as: baskets, pottery, clothing, storage items, and cradleboards (Kalman).  It was the woman's job to take care of the children when they were young; and when young girl's were old enough they would work beside their mothers and learn from them how to take care of the longhouse. 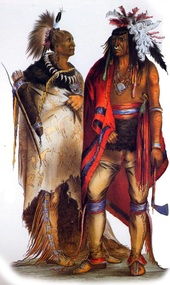 Men were the warriors, tradesmen, and hunters (Kalman 18).  From a young age boys were taught to be brave and refuse fear and pain.  They were responsible for protecting their families from raiding Indian tribes and from animal attacks.  They were also responsible for hunting wild game so that their wive's could prepare the meals.  Additionally, men would go out to trade with other Iroquoian-speaking nations (Kalman 18).   Although women chose the sachems, only men were delegates of the Iroquois Confederacy.

ELDERS
Old men and women alike were also protected by the men.  The job of the elders was to instruct the young one's.  They were considered wise, and respected for their knowledge and guidance (Kalman 19). 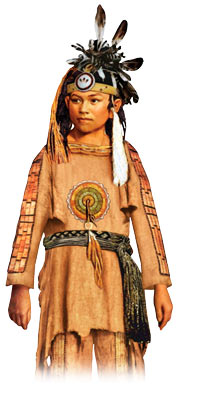 When Iroquois children were born their mothers and the other women of the longhouse would go into a special hut for a week during and after the labor (Doherty 29).  When they emerged, the child was given a proper clan name, a name that no other  living Iroquois would possess (Doherty 29).  Mothers carried their children around during infancy on a cradleboard on their back; when they were working in the fields, leaning over a pot to stir, or planting the garden they might hang the child in the cradleboard on a nearby tree (Doherty 30).

Iroquois children typically did not have a formal education, but were taught alongside of their mothers (if they were girls) and fathers/uncles (if they were boys (Kalman 20).  Children were taught to be strong and brave, to never complain, to walk quietly, and always be obedient (Kalman 20-21).  These lessons were vital to the Native American way of live, where the Indians were forced daily to overcome the elements, to face death, and to hide from attackers or sneak up on prey quietly.

Elders often game more formal instruction on religion to the children (Doherty 31).  Elders would teach the children through stories.  When a child was misbehaving, they were told a story with the moral they needed to hear.  Sometimes, a child was punished by being put out of the longhouse where a clan member was waiting in a mask to scare him/her into obedience (Doherty 32).