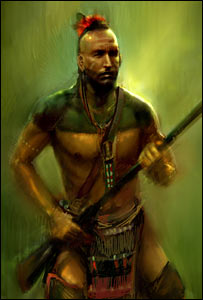 It is commonly believed by scientists and historians that Native Americans crossed the Bering Straight and entered the Americas from Asia during the Ice Age, over fifteen to forty thousand years ago (Doherty 9).  These early peoples spread throughout the Americas, and those who settled in what is now the eastern United States are known as the Woodland Indians (Doherty 10).  The Cherokee, Huron, Laurentian, Susquehannock, Nottoway, and Tuscarora are other Woodland Indian nations that spoke languages related to the Iroquois(Doherty 12).

The most important accomplishment of the Iroquois was to unite their woodland tribes in the League of the Iroquois.  This confederacy brought together five tribes-- the Seneca, Cayuga, Onondaga, Oneida, and Mohawk-- in peaceful alliance and cooperative government after a long history of hostility (Doherty 12).  This confederacy controlled land from New York State and Pennsylvania up through Montreal, Canada (McCall 3). 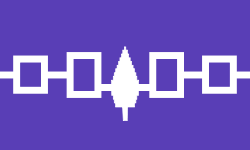 The Iroquois called themselves the Hodensosaunee, or "the people of the longhouse" because Iroquois life centered around the longhouse and the family relationships inside (McCall 5).  It was their rivals, the Alogonquins, that dubbed them the Iroquois, or "rattlesnake" (McCall 5).  To the Alogonquins the Iroquois were silent killers; like the rattlesnake, they slithered up without notice and by the time you heard them rattle, it was already too late.  From boyhood the males were trained in ferocious war tactics, made to drink deadly posions, and forced to defend himself against wild animal attacks (McCall 5).  They were natural fighters; the Hayontawatha belt (left), commonly called the Iroquois flag, was the sign of peace between the five tribes of the confederacy. 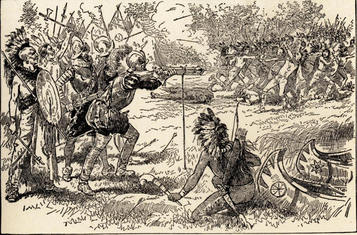 Christopher Columbus arrived in the Americas for the first time in 1492, and called the men he encountered "Indians" because he believed he had reached India (McCall 3).  The Native Americans were referred to as "red men" and savages.  Despite the hostilities between European nations and the Native Americans, the Iroquois did establish a prosperous fur trade by conquering other Native American tribal lands and requiring fur tribute (McCall 20-21).  When it came time for the French and Indian War from 1755 to 1765 most of the Iroquois unofficially sided with the British because of Samuel de Camplain's attacked on the Onondaga village in 1615 and because of a friendly Irish fur trader named William Johnson who sided with the British (McCall 22-23).  However, as time passed and the rivalry between British and French escalated, the League was torn, and eventually the Iroquois power fell (McCall 21).