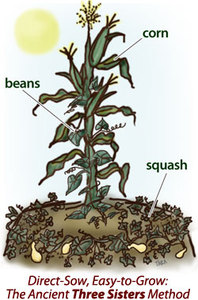 Women in the Iroquois tribes oversaw the agriculture.  The most popular agricultural product on the Iroquois was the three-sisters: corn, beans, and squash (Kalman 14)..  Because the Iroquois eventually used the slash-and-burn method for clearing a field, the corn was planted two rows at a time in mounds between the tree stumps (Doherty 46).  The squash was planted on the ground to keep in moist and to prevent weeds from sprouting up.  The beans were planted underneath the corn so that they could grow up the stalk.

In addition to traditional agriculture, the Iroquois women tapped into many other naturally-grown foods that they collected.  During the spring the Iroquois tapped the trees for maple syrup, which they heated and cooled in molds as maple sugar treats for the children (Kalman 13).  They also collected blackberries, rasberries, huckleberries, and strawberries in the spring, which they dried in the sun (Doherty 51).  Walnuts, hickory nuts, acorns, beechnuts, and chestnuts were collected(Doherty 53).  Skunk cabbage, mustard greens, dandelions, and milweed were used for salads (Kalman 13). 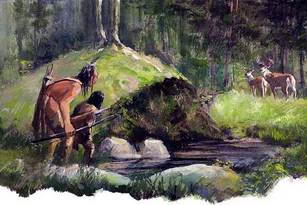 The hunting was done by the men.  Men hunted all sorts of game, including: deer, elk, moose, bears, geese, duck, pigeons, and rabbits (Kalman 12). Sometimes men would go in a hunting party so that they could corral animals into a trap (Kalman 12).  Iroquois men used spears, hooks, nets, and stone weirs to catch fish such as: bass, perch, pike, salmon, trout, and eels (Doherty 51-52).

It was polite for women to always have food in a pot over the fire for their husbands, children, and guests (McCall 13).  Only one meal was eaten a day about midday; otherwise you were expected to get food for yourself when you were hungry (McCall 13).  In addition to helping the men clean, smoke, dry, and store the meat; women prepared the meals.  Corn soup was one of the most famous meal (Doherty 48), but succatosh made of corn and beans was also very popular (McCall 13).